The Palaeontographical Society was established in 1847, and is the oldest Society devoted specifically to the advancement of palaeontological knowledge in existence. The primary role of the Society is to promote the description and illustration of the British fossil floras and faunas, and it publishes monographs to this end.

These monographs document the fossil species from a wide range of taxonomic groups, from chitinozoans and coccolithophorids through to mammals and reptiles, and from all ages from Cambrian to Pleistocene.  An Annual Volume is published, consisting of a number of complete or part monographs, each enclosed in its own covers. The first monograph (on the Crag molluscs) was published in March 1848 and over 650 monographs or part monographs have appeared. It was through this Society that Charles Darwin published his monograph on the fossil barnacles, and Richard Owen set out his early descriptions of dinosaurs. Many of these publications are still available for purchase, either as originals or as reprinted parts.

The Society also supports taxonomic research into the British fossil faunas and floras through its Research Fund.  This provides financial support for palaeontological research (travel, visits to museums, fieldwork, etc.) within the Society’s remit of describing the fossil fauna and flora of the British Isles. 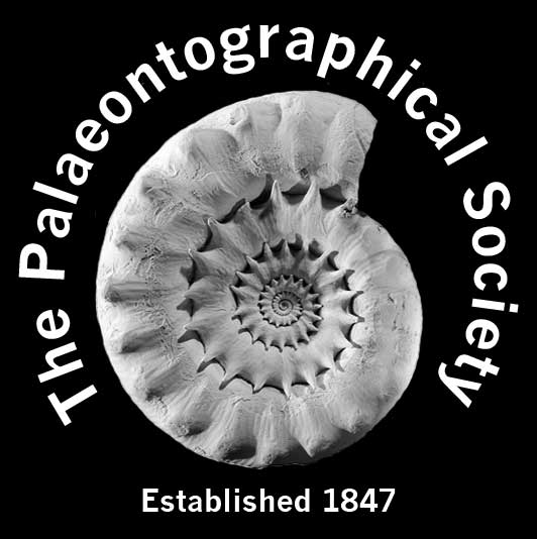 The Palaeontographical Society’s logo features a specimen of Eteoderoceras obesum (Spath, 1925), from the Black Ven Marls, Raricostatum Zone, Densinodulum Subzone, Sinemurian, Lower Jurassic of Stonebarrow, Charmouth, Dorset. The specimen was collected by James Frederick Jackson (1894-1966), of Charmouth – it was featured on Plate 10, fig. 2a of one of our recent monographs (Edmunds 2009), and is held in the National Museum of Wales.

Edmunds, M. 2009. A revision of the Lower Jurassic ammonite genus Eoderoceras Spath and its immediate descendants and other relatives. Monograph of the Palaeontographical Society London: 1-89, pls 1-40 (Issue 633, part of Volume 163)

The History of the Society